Happy 49th Anniversary Dolly and Carl!  Wishing you an awesome day!     Dolly Parton : From Here To The Moon And Back

4. Family
Everyone knows I come from a huge family and in my family there is always someone entertaining. Being with any one of them makes me happy.
3. My husband
Carl has been making me laugh since the day I met him in 1964. There is not a funnier person on the planet and just the thought of him makes me happy.

2. Music
Music has always been something from deep inside of me that I had to get out and share with the world. Writing, playing and singing have been the largest source of happiness in my life.

1. God
Throughout my lifetime God has been my ultimate source of happiness and I consider my time spent with him the highlight of my day.

8. Working
I am a workhorse, just like my daddy. I take great pride in working hard. I get a tremendous amount of personal satisfaction and happiness from a job well done.

9. Food
I have had a love affair with food my entire life. Southern cooking makes me really happy.

Everything I am, everything I have and everything I will do is somehow influenced by my fans. I will forever be grateful to every person who has supported me. Feeling that love from them fills me and makes me truly happy. 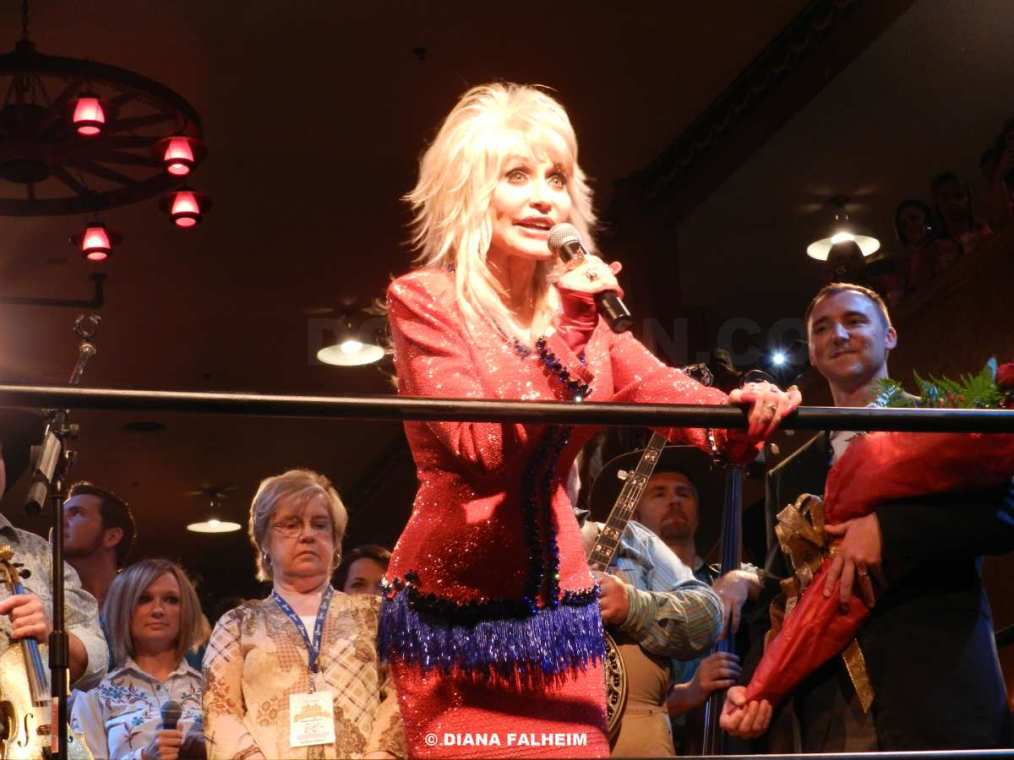 I bought my ticket to see Dolly’s apperance at Dixie Stampede after my day at Dollywood. At 5 pm Dolly came out to celebrate 25 years of Dixie Stampede. I think she sang Red White and Bluegrass or was it Color Me America, she sang amazing anyway. It was really fun to see Dolly one day extra, and that the news announce about her apperance in the morning. YAY!

After this awesome and great performance by Dolly the owner of Dixie Stampede. I follow the people to another show in the buildning.

The Dixie Stampede show was soo Awesome, it included horses, pigeons, pigs, two teams and ALOT of food. During the show I ate soup or gravy with bread, a whole chicken, pork, potato, corn, and a dessert with my fingers and drank alot of Pepsi. I talked to my neighbor who had lived in Pigeon Forge or a city close to Pigeon Forge for about 4 years, this day was his first time, and he loved it. He choosed the best day too, to both see Dolly, this awesome show, and all this great food in one day. I loved that day! I was lucky to have my hotel close to Dixie Stampede, I walked home HAPPY! It’s so cool, first time I visit Pigeon Forge and Dixie Stampede I see Dolly celebrate 25 years of her restaurant chain at the same week I’m there in the beautiful and wonderful mountains in Tennessee…

The day I became a Dolly fan was when I was about 10-11 years of age,I was listening to a radio station my parents listened to every single morning before I would head off to school and just before I started heading off to school,this beautiful song had come on and I told my mother I just wanted to sit and listen to it before I went to school.That day,I was happier at school than I usually was any other day and from then on,I started listening to the radio more trying to hear the name of the person.When I found out her name,I started asking my parents to buy tapes of her for my birthdays and christmas,then when I was old enough and was getting some sort of money,I would go out and buy cds with her music and haven’t stopped since.

Why is Dolly special for you?

Dolly is so special to me because I grew up having alot of hurt and pain within me due to being teased and called names because of how I looked.Each day was full of misery and I began feeling as so I didn’t belong,no matter where it was I went or who I was with.Dolly’s music eased the pain within and help see me through each day.Her words encouraged me to be strong and do all I could to keep a smile on my face.

Tell me about the day you met Dolly…

I forever had dreams of meeting Dolly.I would sit at home,in my room and listen to her music over and over again and watch her movies countless times until the discs would get that way,they’d start to get scratches on them.I would pray everynight before I went to bed that one day I’d hope God would have my prayers answered and give me the dream I’ve always wished for.Then one day,I heard Dolly would be making her way here to Australia during a world tour.Well I was just stoked,I couldn’t believe what I’d heard and I constantly listened out waiting to see just when she’d be over here and where she’d be touring and performing.When I found out she’d be performing in my home town where I grew up,I just had to get online and book my ticket,then when I heard she was doing meet and greets,it made me even more excited and I did all I could to get in to win a meet and greet pass.A few days later before I headed off on my trip to see her perform,I checked my email hoping and praying I had been one of the lucky ten people to win and when I opened up my email and saw the words saying I had won,I was so speechless,my heart was racing and I was quickly on the phone to both my parents and my aunt to tell them the great news.They couldn’t believe it either and they were so happy that I was finally getting my dream of meeting Dolly in person.The night of the concert,I was waiting backstage before the show to meet her and get my picture taken with her and I just still couldn’t believe it was happening.

Do you have any more goals to make about your dreams?

My next goal to make about my dream is to take a trip over to the USA and visit Dollywood and the wonderful Pigeon Forge and hopefully to meet the many people I have made friends with on Facebook.

If you had the possibility to go out with Dolly, what would you do?

If I had the possibility to go out with Dolly,I would give her a nice beautiful bunch of flowers and take her out to a nice restaurant and buy her dinner.