Dolly’s sister Stella is in UK promoting her new cd Mountain Songbird, “A Sister’s Tribute ” to her sister Dolly and Stella also is on a Tour in UK at this moment.

Today Stella had an awesome interview with Good morning Britain  talking about Dolly’s recently favourite meal Tedda pie – a kind Of hillbilly egg pie and their nicknames they call eatchother. Stella’s nickname for Dolly is Cuckoo because Dolly have several Cuckoo clock’s in her houses. See the interview here Stella at Good Morning Britain 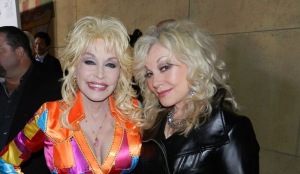