NASHVILLE, Tenn. (June 20, 2015) — Dolly Parton proved, yet again, why she continues to break records around the world as she sold out the Ryman Auditorium in record time. The sellout ranks among the fastest in Ryman Auditorium history. Dolly will take the stage at the Ryman for the special concert event, “Dolly Parton: Pure and Simple,” July 31. The sold-out event marks the first full show Dolly has headlined in Nashville in 12 years. The benefit concert is the Dustin Wells Foundation Gift of Music concert, which supports the W. O. Smith School of Music. Dolly was honored by the invitation to support the charity, which is based in Nashville.

“I think back to all the people who encouraged me and helped me on my way up, and if I can help some young person make music, then I absolutely want to do that. Music is important to me and my family, and I’m grateful that so many people wanted to come see the show that it sold out so quickly.” – Dolly Parton 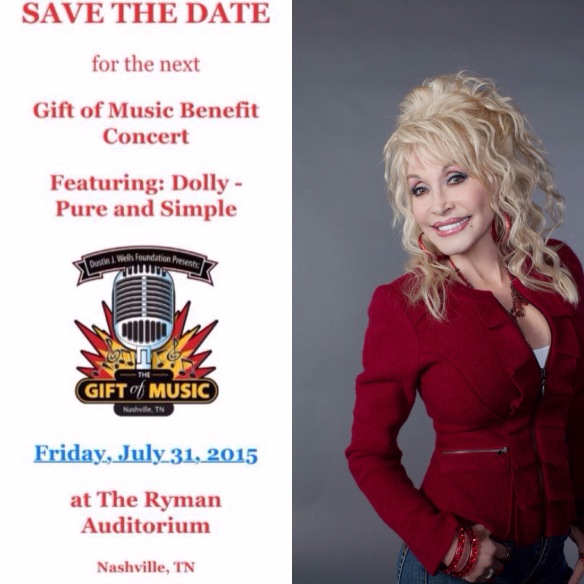 Since its inception in 2008, the Gift of Music has enjoyed the support of some of music’s greatest artists, including Ronnie Dunn, Kellie Pickler, Dierks Bentley, Lady Antebellum, Peter Cetera, Lee Greenwood, Peter Frampton, Gunnar Nelson, and many more generous, talented artists. Each artist donates their time and talent to support the efforts and causes of the Dustin’s foundation.

After Dustin Jack Wells lost his life in a car accident in 2005, his family and friends found a way to keep his memory alive and help others in the process. A fund was set up with all monetary donations used to reach out to others in memory of Dustin. Donating to the W.O. Smith School of Music is just one way the foundations enriches young lives.

The iconic singer, songwriter, musician, actress, and philanthropist is scheduled to perform four SOLD OUT shows at Dollywood on August 8th and 9th to benefit her Imagination Library, a youth literacy initiative she created. She most recently wrapped up her “2014 Blue Smoke World Tour,” where the 100 million album selling singer performed in the United States, Australia, New Zealand, Sweden, Denmark, England, Ireland, Scotland, Wales, Germany, Norway, and Switzerland.