Gary and Larry Lane were born in North Carolina, they’ve always listen to songs by Dolly Parton. Now they’re living in Los Angeles among other stars of Hollywood. Living their dreams and creating new dreams, one of them is to get Dolly Parton in their movie, in the meantime they’ve made an documentary Hollywood to Dollywood, where they gave Dolly their movie script. Now are Gary and Larry in a collaboration with Dolly and her Imagination Library.

You’ve released the Movie in a second edition, Tell me about this edition…
In the second edition of H2D, Dolly signed the contracts with us, and we paid her for all oof the music, but she also allowed us to close the film, with I will Always love You. which is just insane to us, and amazing! 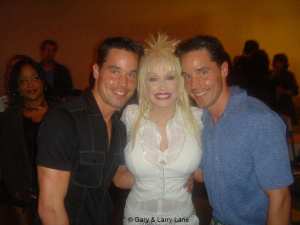 In The Movie you gave Dolly and a few other actors a script, what are The future plans for this script?
We have the script on two different desks at Universal studios, but our dream would still be to have Dolly sign on to do it.
What are Your future plans?
We are also signed contracts with Ovation Tv! and clips of Hollywood to Dollywood will be played on Dollys new 6 part series Song by Song which premiers on March 10th! Our episode “Travelin Thru” airs march 24th, so we are staying in Dollys good graces! and with two National tv appearances NBC Jeff Probst show, and Hallmark channel – marie Osmond show, talking about the film, and Dolly! We continue to spread the message of “the amazing Dolly Parton”
xoxo Gary and Larry
By: Diana Falheim